Vertebrate Publishing One Day as a Tiger: Alex MacIntyre and the Birth of Light and Fast Alpinism 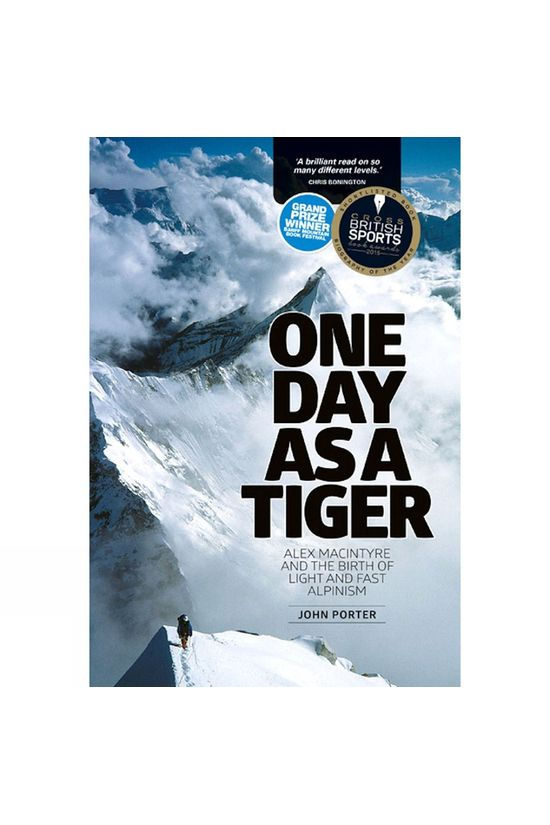 "The wall was the ambition, the style became the obsession."

In the autumn of 1982, a single stone fell from high on the south face of Annapurna and struck Alex MacIntyre on the head, killing him instantly and robbing the climbing world of one of its greatest talents. Although only twenty-eight years old, Alex was already one of the leading figures of British mountaineering's most successful era. His ascents included hard new routes on Himalayan giants like Dhaulagiri and Changabang and a glittering record of firsts in the Alps and Andes. Yet how Alex climbed was as important as what he climbed. He was a mountaineering prophet, sharing with a handful of contemporaries – including his climbing partner Voytek Kurtyka – the vision of a purer form of alpinism on the world's highest peaks. One Day As A Tiger, John Porter's revelatory and poignant memoir of his friend Alex MacIntyre, shows mountaineering at its extraordinary best and tragic worst – and draws an unforgettable picture of a dazzling, argumentative and exuberant legend.

John Porter was born in Massachusetts and he started climbing at the age of twelve, serving his apprenticeship in the White Mountains, Rockies, Cascades and Yosemite. He moved to the UK in the early 1970s to do postgraduate work at Leeds University where he joined a team of climbers dedicated to clean ethics, alpine-style and the fostering of international partnerships. Ascents of the North Face of Koh-i-Bandaka (1977) and the south face of Changabang (1978) with Alex MacIntyre and Polish friends were achieved in the middle of the cold war. Other climbs include lightweight attempts of the west ridge of Everest in winter, the north-west ridge of K2, the east face of Sepu Kangri, first ascents of Chong Kundam I and V in the Eastern Karakoram, and many other notable climbs around the world over a period of fifty-five years. In 1980 he founded the Kendal Mountain Festival with Brian Hall and Jim Curran, a